The buses in here is a bit different than the bus you see anywhere else. It's because the buses were made locally by a coachbuilder. So, the bus company only have to buy the bus chassis and let the coachbuilder do the rest, because it's cheaper than buy a completely built-up buses from bus company.

And now, the buses. There's quite a lot of bus maker in Indonesia, but i'll only focus on the top 6 bus makers sorted by market share.

1. Hino (Japan)
Hino is the most common buses here in Indonesia. The reason is simple, they're cheap, easy to work on, very reliable, easy to tune, and quite powerful. The base model hino chassis with 260hp engine and no air suspension retails for mere
sniff of 50k USD, and the top of the line RN285 with 285hp is just 65k USD, and those bus can be tuned to as high as 350hp just by adjusting the turbo and ECU setup. And because the bus is cheap, the ticket is pretty cheap as well, since in here some bus company have varied ticket price depending on the bus engine and creature comfort inside.

But, because Hino is cheap, they tends to skip some features you normally get on the other bus maker. For instance, you don't get Air Suspension. Sometimes you
don't get ABS as well, so stopping the bus is a bit scary. And because the bus has no air suspension, the ride is pretty rough.

2. Mercedes-Benz (Germany)
Mercedes is the 2nd most common bus you'll see here in Indonesia. The reason is simple, it's the most comfortable bus in here. Seriously. Mercedes Bus is all about long-distance comfort. They don't even let the bus company to re-adjust the Air Suspension on some models because they say it's the best settings suited for Indonesian country road, although if you bought the top of the line OH1836 or OH2542 you can adjust the air suspension.

The another reason is, the Mercedes buses is full of advanced technology, like active body control or ABS just like their cars, but it's not very expensive. A base
model OH1526 with 260hp is just 60k USD, same price like Hino RN285, and top of the line 1836 is only 120k USD, cheaper than Swedish offering like Scania and Volvo. The only downsides is, the bus top speed is Electronically limited to 120km/h. And in here, speed matters.

3. Golden Dragon (Chinese)
If you see Golden Dragon bus, don't be fooled. It's not a Citroen. It's Golden Dragon, a Chinese bus manufacture. Golden Dragon is a new player in Indonesian Buses, but now they're gaining quite a lot of marketshare. It's because they're copying Scania. So they
offers similar power to the Scania K360, have similar features like air suspension, abs, retarder, cruise control and many else, but at half the price. That's Quite a deal. No word on reliability tough, but i think they're pretty reliable, having seen some buses break the 500k km mark easily.

4. Scania (Sweden)
Scania is famous in here for the Power. If you look for a thrilling bus ride, go take a Scania bus in here, you won't be disappointed. The power comes from a finely tuned 13,000 cc engine, pumping out a massive 360-380hp. Top Speed? 160km/h for the K380ib.
But, as the saying goes: "With The Great Power comes with a Great Price". That's why the Scania is not really popular in here.

5. Hyundai (South Korean)
The Story of Hyundai is a bit unique. It may says Hyundai on the front, but underneath it's a Mitsubishi since it has the same Transmision and Engines made
by Mitsubishi. 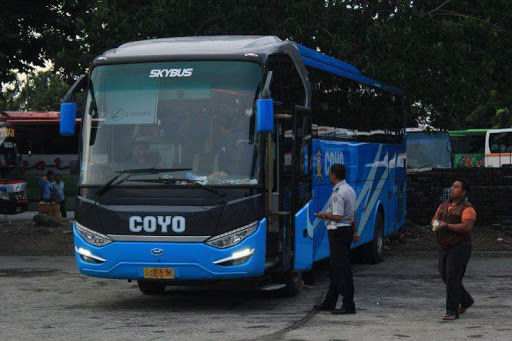 The Hyundai buses is powerful, nearly as powerful as the Scania. But my favorite thing about this bus is sometimes it's shooting flames from the exhaust like a Lamborghini when it's driven hard. Other than the flames, it's just a regular bus.

6. Volvo (Sweden)
Volvo used to be the ultimate choice of bus, before Scania arrives and steals all Volvo costumers. I mean, Volvo offers Air Suspension, ABS, cruise control, and 330hp engine, all back in 2004. But then it's discovered that the Air Suspension was not suited for Indonesian roads due having very low pressure, and therefore prone to fail. Plus dealership networks is
a bit hard to find, so Volvo buses
becomes more and more rare.

The other bus makers including Daewoo, Mitsubishi, MAN, Toyota, Perkasa, Nissan Diesel, and many others, but nowhere as common as the top 6 makers above.