Mercedes-Benz is a brand of vehicles and engines that are manufactured by the German concern Daimler AG (formerly known as Daimler Chrysler and Dainler-Benz). The most used short natienovanie this technique - Mercedes. The word is derived from the spain female name, which was called the daughter of one of the trading partners of the company, famous racer Emil Ellinka. Mercedes-Benz is always the pioneer developer of engines for heavy automotive, construction, road and agricultural equipment. 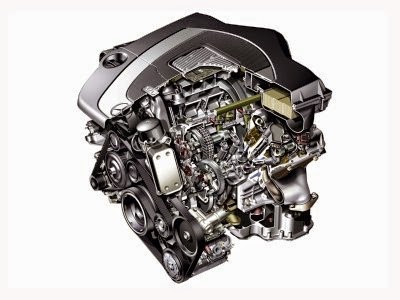 In the twentieth century, all trucks drove to petrol engines. The first three copies of 5-ton trucks with diesel engines agents left the factory gates Daimler Motor Company (Daimler-Motoren-Gesellschaft, DMG) in the autumn of 1922. Innovative use of diesel engines has reduced fuel consumption by 83 percent compared with conventional gasoline engines. The first diesel truck developed capacity 33 kW (45 hp) at 1000 r / min. In 1923 in Berlin, the company launched the next diesel truck with a capacity of 29 kW (40 hp)

First diesel, developed together after connecting Benz and Daimler - the six-cylinder OM 5, which was introduced in 1927. With the volume of 8.6 liters, it gave power 55 kW (75 hp). Since that time Mercedes-Benz engines are designated by letters OM, are like the German word "Ölmotor", which at the time named products Traditional Diesel truck engines at the time were carbureted gasoline engines. The turning point came in 1932, along with the first light truck Mercedes-Benz Lo 2000 OM 59 diesel engine capacity of 3.8 liters and power of 40 kW (55 hp).

Incredible fate of the 300 series

300 series is legendary among the diesel engines. Its history spans half a century, and begins in the pre-war forties. That's when to create new four-and six-cylinder OM 301/302. Interruption in the Nazi research was resumed after the war. The new engine of the series under the name OM 312 was introduced in 1949. It was almost identical to the basic pre-war diesels, had the same distance between the cylinders and cylinder diameter of 90 mm. The difference was in the size of the head and working stroke cylinders, increased from 95 to 120 mm. With the volume of 4.6 liter engines power output was  66 kW (90 hp).

Because of the financial crisis 80 years of the next generation of engines were stopped. Held a significant modernization of existing engines, which ended on the border in 1983 and 1984 the debut of four-and six-cylinder diesel engine OM 364/366 volume respectively 3.97 and 5.96 liters and power up to 147 kW (200 hp), with time raised to 177 kW (240 hp).
After the release of a million pieces and start European ecological standards Euro III in 1996, the engines of the 300 series have gone to "retire" - but only in the Old World. In other markets, they were published more than a year. So, in 2009, after 60 years since the birth of first engine- OM 312, in Brazil announced model L-1620 Classic with a classic OM 366 LA engine power of 155 kW (211 hp), the basic design of which has not changed from 1949

The Series 400
As early as the mid-1970s Mercedes-Benz began developing commercial vehicle engines which featured an intercooler in addition to the exhaust-gas turbocharger. Cooling reduces the temperature of the air compressed by the turbocharger, thus increasing the oxygen content. This permits obtaining higher power in engines with the same technical data: the OM 422 A V8 diesel developed 243 kW (330 hp) with 14.6 litres displacement, whereas its intercooler-equipped brother introduced in 1980 developed an output of 276 kW (375 hp).
This OM 422 LA engine was the first commercial vehicle engine from Mercedes-Benz to have an intercooler. It was followed in 1982 by a 300 series engine, the OM 362 LA, with the same technology and an output of 141 kW (192 hp) at 2600 rpm.

In 1996 it took a radical change of heavy engines Mercedes-Benz. The debut of the 900 in the spring and backed by innovative features: electronic control, direct fuel injection with separate pumps for each of the cylinders.There were four-cylinder  OM 904 LA engine of 4.3 liters producing 125 kW (170 hp) and six-cylinder OM 906 LA volume of 6.4 liters capacity reached 205 kW (279 hp). In both cases, used and pre-turbo cooler air. Maximum torque is within the reach in the range from 1200 to 1600 vol. / min. Increasing the diameter of the cylinder from 102 to 106 mm and stroke from 130 to 136 mm increased the potential of the 900. The next generation these engines are the four-cylinder OM 924 LA 4.8-liter with 160 kW (218 hp) and six-cylinder version, the volume reached 7.2 liters Power 240 kW (326 hp).
Tweet
Next
« Prev Post Previous
Next Post »
Terima Kasih
Subscribe to: Post Comments (Atom)